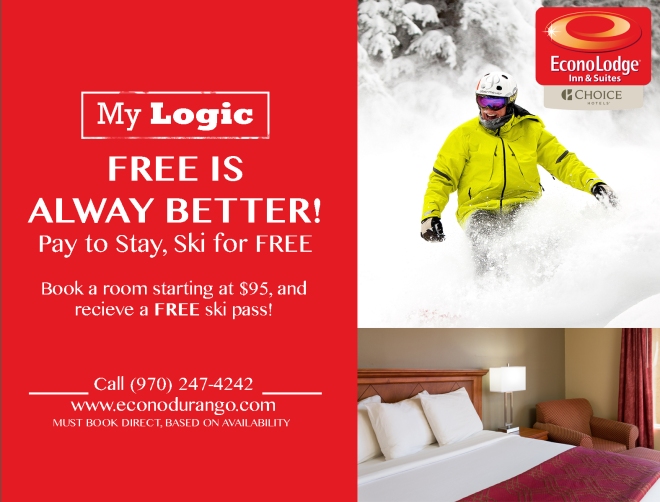 Skiing-slash-snowboarding is the best. But let’s face it: Shredding can be an investment. Not that it’s not worth it — it is — but any time you can save some money and get on the slopes, well, DO THAT.

That’s where we come in! The Econo Lodge Inn and Suites Durango is offering a sweet ski deal, brah: “Pay to Stay, Ski for Free.”

If you book a room with us for $95 or more, you get a free adult lift ticket to Purgatory Resort (the artist formerly known as Durango Mountain Resort). You’ll receive one free adult pass for every night booked. We partnered with Purgatory to offer this deal, which is good for the remainder of the season, so don’t miss out!

Purgatory is nestled in the heart of the San Juan Mountains and delivers some of the best skiing in Southwest Colorado — nope, scratch that — in the entire state. Stay up to date on snow accumulations and trail openings by checking Purgatory’s snow report.

We’re a short drive to Purgatory and because we’re located on Main Avenue (aka US Highway 550), getting there is as simple as turning north out of our parking lot, staying on the road for 30 minutes (26.1 miles exactly) then turning into Purgatory. Easy.

We’re also among the top-rated Durango hotels, so you get a great night of sleep in one of our updated rooms and a free day of skiing at Purgatory. Get on this deal and get on the slopes before spring arrives!

There are two types of people in this world: Those who go out on New Year’s Eve, and those who don’t. Oversimplification? Sure, but sums it up pretty nicely, no? Extroverts vs. introverts, homebodies vs. party animals — you get the gist.

Purgatory Resort knows how to party on New Year’s Eve. The resort is offering several New Year’s Eve dining options, including a New Year’s Eve dinner at Hoody’s; pizza at Paradise Pizzeria along with all the New York City New Year’s festivities on the big screen; and extended dining and bar hours at Purgy’s, where the party will continue with Durango bluegrass band The Outskirts playing until 1 a.m.

For something super duper special, you can also reserve a spot for the Snowcat dinner. Ride in a Snowcat from the base area to Powderhouse Restaurant to enjoy a five-course dinner with wine pairings.

Purgatory’s signature NYE event, though, is the torchlight parade and fireworks show. The resort’s entire ski school lights up the slopes as they ski down the mountain carrying torchlights. When the parade arrives at the base area, it’s time to light up the sky with a fireworks show!

After the fireworks, catch another show: the New Year’s Eve Night Rail Jam. The area’s best talent will showcase their skills under the lights at DC terrain park.

On both New Year’s Eve afternoon and again on New Year’s Day, guests can also take a Snowcat tour — sans dinner but plus hot cocoa and sweeping views.

Mahogany Grill located in the Strater Hotel is something of an institution when it comes to holiday dinners, and New Year’s Eve is no exception, except for the exceptional holiday spread the restaurant will be serving from 5-9 p.m.

After you’ve had your fill, simply walks a few steps to Diamond Belle Saloon or the The Office Spiritorium, both located in the hotel, for a drink (or two or more) and some live music.

Hop aboard the Durango train to enjoy the New Year’s Day Brunch Train. The Durango & Silverton steam-powered train will huff and puff along the rails as passengers enjoy a hot brunch buffet, live music and winter-white scenery sliding past the windows. Premium Class tickets include a catered hot brunch that features a yogurt bar, Belgian waffles, skillet scrambles and plenty more as well as free non-alcoholic drinks and live music. Standard class tickets don’t include brunch, but passengers will have access to the concession car.

During a 45-minute stop at Cascade Canyon wye, passengers can disembark to take a stroll to the footbridge and then warm up by the stone fireplace — or they can choose to stay warm and comfy in their cars.

If you’re looking for Durango hotels for your long New Year’s weekend in Durango, stay with us at the Econo Lodge Inn & Suites Durango near downtown Durango. We’re located on Main Avenue, just a few blocks from the hub of downtown, and Purgatory is a straight shot north of us. Warm up by the fireplace in our newly renovated lobby! Book your holiday stay with the Econo Lodge Durango today.

Will Tom Hanks be there? Well, we can’t say for sure he won’t be on the Durango Polar Express train, but you’ll have to ride to find out for sure. However, we know with certainty that one celebrity will be there: Mr. Claus himself.

The Polar Express Train Ride is the Durango and Silverton train’s premier annual event, and cars fill up quickly with Santa-seeking, Christmas-loving, pajama-wearing kiddos. The Durango Polar Express ride runs nearly every night through Jan. 2 with the exception of Christmas Day and New Year’s Day.

The award-winning childhood classic, the Polar Express, comes alive aboard the Durango train as the Conductor, Hobo, Hero Boy, Billy, Santa and elves sing Christmas carols during the trip to and from the North Pole. Personal chefs serve each passenger hot chocolate and a treat and also read story on the train ride to the North Pole (cough*Cascade Canyon*cough) to pick up Santa.

Chefs will lead everybody in singing Christmas songs as Santa makes his way to visit each car to give a special gift to each kid!

Three levels of passenger cars are available. First-class cars include seating at tables and chairs, festive Christmas decor in each car and upgrades such as a souvenir Polar Express mug. Deluxe passenger cars have “flip-over” seating so people can face each other, tickets also include a take-home ceramic mug. Coach cars have forward-facing, side-by-side seating for up to 40 passengers per car.

While visiting Durango (to visit the North Pole), stay with us at the Econo Lodge Durango! Warm up by the fireplace in our recently remodeled lobby. Our downtown Durango hotel is only a mile north of the Durango train depot, a straight shot on Main Avenue, and you can even ride the Durango trolley from our hotel to the Durango depot and museum! The Econo Lodge Inn and Suites Durango is one of the top affordable Durango hotels and is under new ownership. Book your room today!

It’s almost Christmas. Seriously, it’s three weeks away. There seem to be two types of holiday people: Those who finish all their shopping before Labor Day, and  those who are always scrambling with last-minute shopping, decorating and planning.

Skiing, snowboarding, snowshoeing, horse-drawn sleigh rides — sure, those are amazing things to do at Purgatory Resort. But for extra-special holiday fun, don’t miss Santa on the Mountain from 2-3:30 p.m. Dec. 23 at the base area. Santa and Mrs. Claus will be handing out candy canes and taking last-minute gift requests — but only if you’ve been nice! That same day, Purgatory is offering free holiday wreath-making classes at Durango Mountain Institute from 10 a.m. to 3 p.m.

It that’s not exciting enough, take your kin on a scenic snowcat tour on Saturday, Christmas Eve or Christmas Day. Visitors will first ride the chairlift to the mountaintop then take a ride in a snowcat while taking in panoramic views and sipping hot cocoa. The tour is $50 per person and reservations are required. Tickets may be booked by calling 800-525-0892.

People can also leave the Christmas Eve cooking to the pros at Purgatory with a family-friendly holiday buffet at Purgy’s Slopeside from 4-9 p.m. on Christmas Eve. The smorgasbord includes a dessert buffet, a Christmas cookie station and a build-your-own hot chocolate bar.

Downtown Durango manages to be both hip and happening while also being cute and quaint. The historic downtown promises some of the city’s best shopping at boutiques and specialty shops, art galleries and wineries, natural products stores and shops that peddle the three Cs: candy, chocolate and coffee.

Some of the major sights to see in downtown include the Durango train depot and the historic Strater Hotel. Enjoy a tasting flight at Four Leaves Winery, get an array of sweets for those stockings at Fuzziwig’s Candy Factory or browse any number of art galleries and markets. Check out the Winter Solstice Artisan’s Market at the Durango Arts Center that runs through Saturday, Dec. 23. The annual market features more than 40 artists who were selected to show and sell their artwork and creations, such as ceramics, glass, jewelry, textiles, photography, paintings and more.

On Christmas Eve morning, head over to the Henry Strater Theatre to ring in Christmas with the Patrick Crossing Band playing Celtic Christmas tunes and Christmas songs.

While you’re spending Christmas in Durango — or if you have people visiting for the holidays, and you can’t (or don’t want to) have houseguests — stay with us at the Econo Lodge Inn & Suites Durango. We’re located on Main Avenue, just a few blocks from the hub of downtown, and Purgatory is only a short drive straight north from our front door. Come check out our newly renovated lobby and warm up by the fireplace! Book your holiday stay with the Econo Lodge Durango today.